Mint of Poland Group (MPSA) has released its H1 2020 consolidated financial report. Despite the COVID-19 pandemic, the Group generated stronger results as compared with the corresponding period of the year before. MPSA also improved its return on sale and operating profit margin. 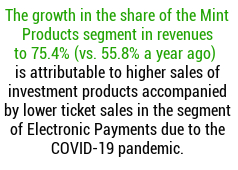 The performance of Mint of Poland Group (MPSA) in the first two quarters of 2020 confirmed the choice of the Group’s long-term development directions in terms of profit generation and maintenance of strong financial liquidity.

In the reported period, MPSA improved its profitability ratios: return on sale and operating profit margin (i.e. due the recorded revenues from sale of apartments in the “Mennica Residence” project) and posted higher sales volumes and product rentability in the Mint Products segment (increased demand for gold). This growth more than compensated for the drops in the segment of Electronic Payments due to COVID-19 as lower use of public transport led to lower number of ticket purchase transactions by passengers.

– Our profitability measured by ratios of return on net profit improved across the board on the back of higher sales revenues and disproportionately lower costs of sales in the reported period as compared to the year before. This was the case even despite the impact of the balance-sheet (non-cash) revaluation write-down on the shares held in ENEA S.A. recorded in Q1 2020. Excluding this one-off factor, the return on net sales in the reported period was almost three times higher than in Q1-Q2 2019 – explains Artur Jastrząb, Board Member and CFO, Mennica Polska S.A.

An increase in inventories was recorded in two segments: Mint Products (due to the need to meet the higher demand for gold investment products) and Real Estate Development (resulting from the continued work on the projects: “Mennica Residence” and “Bulwary Praskie”). At the same time, a decrease in short-term investments was caused by an increased investment in working capital and the negative revaluation of shares in ENEA S.A. On the other hand, the short-term liabilities grew due to further prepayments being made by future apartment owners under the projects “Mennica Residence II” and “Bulwary Praskie” and more prepayments made for investment products in the segment of Mint Products.

In the first two quarters of the year, despite limited supplies of gold due to the coronavirus pandemic, the Mint of Poland maintained sales continuity. The Group has retained its position as the largest distributor of investment gold and the only producer of bullion bar in Poland.

– The global economic uncertainty, the large-scale money printing by the governments have led to a significant rise in demand for gold. Investors are looking for a safe haven for their capital, and gold has been considered the most stable currency for centuries – comments Grzegorz Zambrzycki, President of the Management Board and Managing Director, Mennica Polska S.A.

In the reported period, the Mint of Poland also expanded its offer of investment silver by adding 1-ounce bullion coins sourced from global suppliers.
In the area of general circulation coins, an important event for the Mint Products segment in the first half of the year was the conclusion of an agreement with the Central Bank of the Dominican Republic, under which sales of 20 million coins were contracted for 2021. The Mint of Poland was also invited to a tender announced by the Treasury Ministry of Thailand (with the potential volumes of more than 1.5 billion circulation coins) and has been shortlisted as one of three companies which will take part in the tender for the Central Bank of Brazil. Moreover, in the reported period MPSA completed deliveries to the central banks in the Dominican Republic, Costa Rica and Paraguay.

In H1 2020, the revenues of the Electronic Payments segment reached PLN 88.0 million against PLN 142.2 million the year before. The segment’s result was PLN (-)7.3 million (vs. PLN 0.7 million a year earlier). The marked change is attributable to the COVID-19 pandemic as lower use of public transport led to lower number of ticket purchase transactions by passengers.

– In the first half of this year, due to the state of epidemic emergency declared in Poland, our activities in the Electronic Payments segment were focused primarily on process optimization and project maintenance. We constantly strive to use our know-how to support our business partners in this difficult time – says Grzegorz Zambrzycki, President of the Management Board and Managing Director, Mennica Polska S.A.

In the reported period, the Mint of Poland expanded its ticket sales network in Warsaw by adding another 30 ticket vending machines. In Bydgoszcz and Wroclaw, on the other hand, a functionality enabling the integration of payments for transport services on a city-wide scale and supplementing the traditional city card system was launched.

In H1 2020, the Real Estate Development segment generated revenues of PLN 13.6 million against PLN 2.5 million the year before. The segment’s result was PLN 2.0 million [vs. PLN (-)5.1 million a year earlier]. The rises were achieved thanks to the final sale of seven apartments in the “Mennica Residence” project. 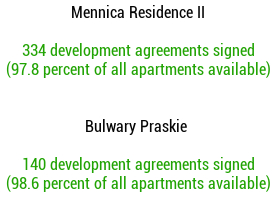 In the reported period, the Mint of Poland also obtained a certificate of occupancy for the “Mint Residence II” project. The total area of the apartments sold in the project is 14,885 sqm (95.3% in Stage II of the project).

In the “Bulwary Praskie” project, the total area of the sold apartments reached 5,881 sqm (97.8% of all apartments in Stage I of the project).

In both projects, as soon as the keys to their apartments are handed over, the buyers will sign notarial deeds so the sale will be recorded by MPSA in subsequent periods.

PreviousMennica Legacy Tower recognised as Warsaw landmark
List of current affairs
Mint of Poland Group moves up 116 positions in the ranking of Top 500 companies in PolandNext
Closing of the release or further navigation of the site signifies your consent and no blocking of cookies.