HomeAbout usNewsThe World Games 2017 medals from the Mint of Poland

The World Games 2017 medals from the Mint of Poland

The best participants of the 10th World Games will receive medals minted at the Mint of Poland. The World Games – a unique sport event – is a great opportunity to admire (first time in Poland) the struggle of over 3,500 athletes of various non-Olympic  sport disciplines.

The World Games 2017 embrace numerous sports, including orientation run, canoe polo and pétanque. The medals produced at the Mint of Poland will perfectly fit in this festival of sport and become its real highlight.

The Mint of Poland has prepared two types of medals to honor the participants of the games: a bigger one with diameter of 80 mm and a smaller one with diameter of 60 mm. The obverse of each medal features the logo of the 10th World Games, whereas the reverse, designed according to the project of prof. Mateusz Dworski, features the Earth with the town hall in Wrocław sitting on top of it. The globe is surrounded by silhouettes of the athletes representing the disciplines of the 10th World Games.

The Mint of Poland is proud that its commemorative products are promoted during such an important international sport event. It’s a privilege to have this opportunity and strike medals  that honor the best athletes in the world. 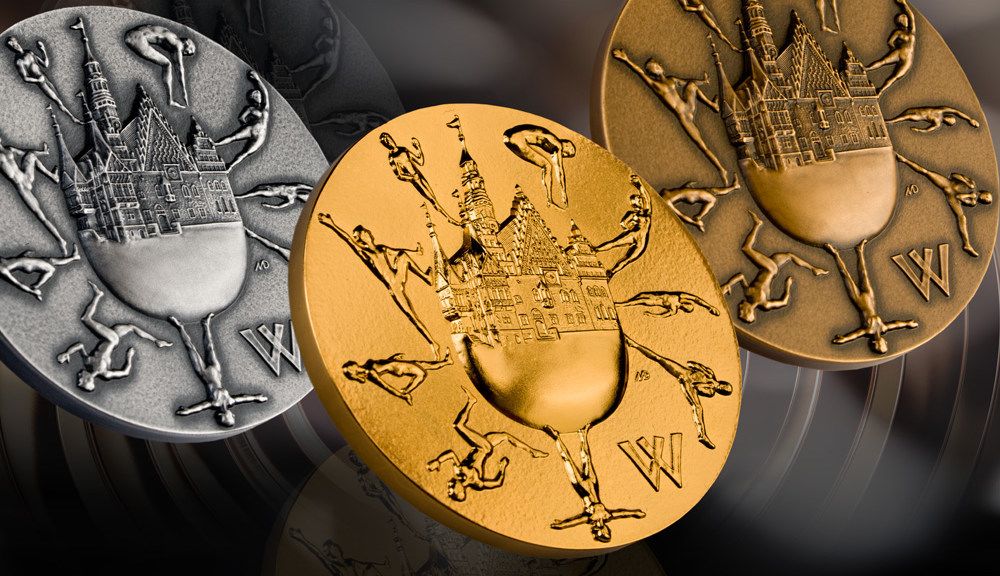 Medals dedicated to the 10th World Games have been presented at a special meeting attended by the vice-president of the city of Wrocław, the members of the Ministry of Sport and Culture, the presidium of the Polish Olympic Committee board of directors, the president of the Wrocław Organizing Committee and the medal designers from the Academy of Fine Arts in Wrocław.

The history of The World Games dates back to 1981. The event obtained the honorary patronage of the International Olympic Committee to promote various non-Olympic sport disciplines. First World Games were held in Santa Clara in the United States. Thirty-six years later the championship is held in Wrocław, where spectators from all over the world have the opportunity to admire the best athletes from over 100 countries. The games promote 31 sport disciplines.

PreviousMint of Poland – star of COINS 2017
List of current affairs
Medal for the Mint of Poland during TRANSEXPO 2016Next
Closing of the release or further navigation of the site signifies your consent and no blocking of cookies.