The Mint of Poland wins the title of “The Best Innovator”

The Mint of Poland was announced one of the winners in the ‘Good Company’ Awards in the Mazovia Province. The Company was named “The Best Innovator” in the group of Large and Medium-Sized Enterprises. The contest, initiated by the Union of Entrepreneurs and Employers (ZPP), is held under the patronage of the Marshal of the Mazovia Province and the President of the Capital City of Warsaw. 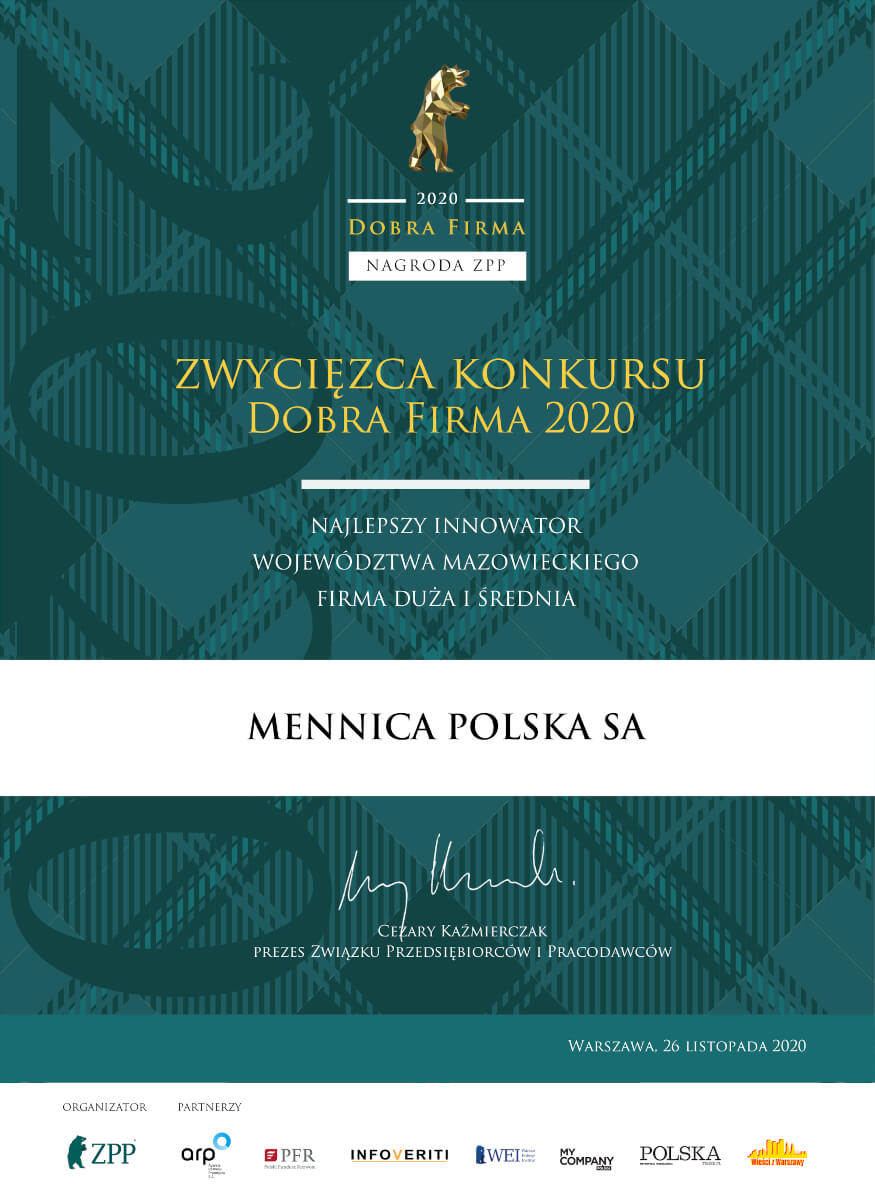 The Mint of Poland’s diversified business model rests on solid foundations – the highly unique competences, broad expertise and proven acumen for spotting business development opportunities which go beyond the flagship operations. In each of the three business segments, the Company bolsters its market position by implementing and consistently promoting innovative solutions.

“The Best Innovator” according to the verdict of experts

The Mint of Poland was voted winner of the Grand Prize of “The Best Innovator” in the group of Large and Medium-Sized Enterprises by experts of the Union of Entrepreneurs and Employers (ZPP) in ZPP’s newly-reactivated ‘Good Company’ Awards in the Mazovia Region. As the congratulatory letter from the organizers reads: “Your company, as a business leader, is an example of how the combination of effective decision-making processes with employee potential can contribute to the development of the entire region and the creation of jobs”.

The ZPP experts analyzed the financial performance of the companies in the region over the last several years based on the data from Info Veriti, a business intelligence agency. Also, the potential for innovation and development along with the market reputation were considered. From a total of 84 best-performing companies shortlisted in the Mazovia region, 8 winners in 4 categories: The Best Innovator, The Best Investor, The Best Employer and the Effective Company, along with 2 winners of Special Prizes were selected. The full list of winners and shortlisted companies is available here.

The Mint of Poland – more than just coins

In its core business segment, Mint Products, the Mint of Poland, as one of very few mints worldwide, produces collector coins in virtually every technology available on the market. In Poland, apart from the production of circulation and collector coins, it is also the only producer of gold bullion bars for investment purposes. In this context, it is noteworthy that even in the most recent, very challenging months, the Mint of Poland successfully maintained the continuity of product supply. Our customers could continue to purchase gold bars and bullion coins without any disruption, also thanks to the Company’s consistent development of modern sales channels.

In the Electronic Payments segment, the Mint of Poland is a leader in implementation, operation and development of urban card systems across the country and a recognized innovator in this area. This year only, the Company’s pioneering solutions were implemented in Poland’s major cities such as Łódź and Bydgoszcz.

From this December, public transport users in Łódź, as the first ones in Poland, can use a novel fare calculation system for tram journeys without transfers between the lines. This cheaper option is available to passengers who pay for tickets with a contactless card in mobile validators using the Company’s own-developed and multiple award-winning solution – Open Payment System (OPS). Earlier, as a pioneer on the market, the Mint of Poland implemented an innovative season-ticket-on-bank-card scheme for public transport users in Bydgoszcz.

For several years now, the Mint of Poland has also been increasingly involved in property development. The Company’ Real Estate Development segment invests in both office and residential projects. The portfolio of schemes with the Mint of Poland brand includes: the high-tech office complex “Mennica Legacy Tower” and the apartment complex “Mennica Residence” – both located in the heart of Wola, the Polish capital’s new CBD – and in “Bulwary Praskie”, a project currently developed in the Warsaw district of Żerań on the east side of the Vistula River.

PreviousMint of Poland’s wide range of gold products already available in a new stationary point of sale in Warsaw
List of current affairs
Łódź tests an innovative fare calculation system for public transport journeys with a transferNext
Closing of the release or further navigation of the site signifies your consent and no blocking of cookies.