Mint of Poland Group has published its Q1 2020 consolidated report. Excluding one-off and extraordinary events, across-the-board growth was recorded as compared with the corresponding period of the year before. The financials confirm the rationality of the Group’s business development strategy, as well as the Group’s stability, as evidences by the profits being in line with predictions and satisfactory financial liquidity.

In the reported period, despite the COVID-19 pandemic, the Group recorded an improvement in profitability ratios: return on sales and operating profit margin. This resulted directly from the fact that the revenues from the final sale of apartments in “Mennica Residence I” were booked, as well as from higher sales and profitability in the Mint Product Segment (category: Investment Products). The generated results confirm the long-term sustainability of the business development strategy and its directions.

As compared to Q1 2019, the Mint of Poland Group delivered stronger operational performance. Q1 2020 sales revenues were PLN 191.9 million (up by more than 11 percent) while, at PLN 6.7 million, the Q1 2020 operating profit grew by 50 percent year-on-year. The consolidated net loss recorded by the Group was due to the balance-sheet revaluation write-down on the shares held in ENEA S.A. Excluding one-offs and extraordinary events, the net result increased by nearly 126 percent (from PLN 2.7 million to PLN 6.1 million). The consolidated EBITDA rose from PLN 10.6 million in Q1 2019 to PLN 12 million in Q1 2020 (up by more than 15 percent).

– In the reported period, we posted a drop in net profit-based ratios, attributable to the recognition of the non-cash balance-sheet revaluation write-down on ENEA shares. Excluding that, the net return on sales was twice as high as in the corresponding period of the previous year – explains Artur Jastrząb, CFO, Mennica Polska S.A.

In 2020, the result adjustment mainly concerned the financial expenses resulting from recognising a balance-sheet revaluation write-down on the shares held in ENEA S.A. (PLN 27,630 thousand) and consequently, an adjustment of the income tax (down by PLN (-)5,281 thousand). 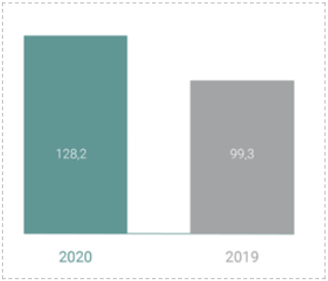 To best meet the needs of its clients, the Mint of Poland has pursued investment in the development of its sales channels for several years now. The professional approach adopted to their ongoing diversification has allowed the Company to strengthen its position as a leader on the gold investment market. During the pandemic, one of the key sales channels, apart from phone orders, was the Company’s online shop.

– Increased demand for bullion bars and coins has been observed since the beginning of the year. However, the upheaval caused by the pandemic has brought us a situation where demand significantly exceeded supply. The record-high price of gold, in Poland mainly resulting factors such as depreciation of the national currency, as well as the desire to find a safe haven for their capital, has encouraged many people to invest in gold and gold products. As the largest distributor of investment gold in the domestic market and the only gold bar manufacturer in Poland, however, we were well prepared to continue to satisfy the growing needs of our clients – comments Grzegorz Zambrzycki, President of the Management Board and Managing Director, Mennica Polska S.A.

Among important events for the Mint Products segment, the recognition of the Company’s achievements on the international stage should be mentioned. In January, the Mint of Poland won a total of five awards in four leading categories at the prestigious industry event – XIII Annual International Coins Contest “Coin Constellation” in Russia. That achievement was even more remarkable as more than 220 different coin designs from 33 participants in 23 countries were entered to this year’s contest. At the turn of January and February, during the World Money Fair 2020 in Berlin, the Mint of Poland presented its new products in the category of collector coins. As always during such industry events, the technological advancement and craftsmanship of the Company’s newest products aroused great interest among the visitors. 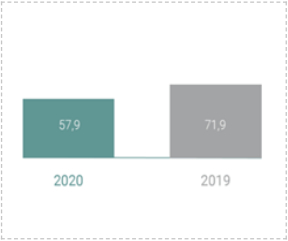 In the reported period, the Electronic Payments segment generated lower revenues (down from PLN 79.1 million to PLN 57 million) and posted a year-on-year drop in the result (PLN (-)1.7 million in Q1 2020 vs. PLN 1 million in Q1 2019). EBITDA reached PLN 1.9 million (vs. PLN 5 million the year before). This was caused by the COVID-19 pandemic, which led to lower use of public transport users. In these extremely difficult times, the Mint of Poland maintains the continuity of ticket sales while observing the highest standards of security and hygiene.

However, in the reported period, the Mint of Poland continued to develop innovations in line with the idea of smart city. The beneficiaries of such innovation projects are local governments, residents and tourists. In Bydgoszcz and Wrocław, a new functionality was added to the Open Payment System (OPS) for settling transactions made on public transport using the popular contactless payment option. Thanks to the innovation, all transport payments made over the period of 24 hours are accumulated so that the payer’s bank account is debited once only. This solution enables the integration of all payments for transport services throughout the city and enhances the traditional city card system. The implementation is in full compliance with the most stringent guidelines of international contactless payment systems – MTT Visa (Mass Transit Transactions) and PAYG MasterCard (Pay As You Go). 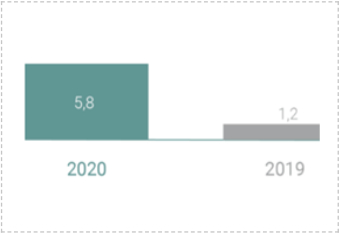 The “Mennica Legacy Tower” project is presently in the phase of the acquired tenants taking over occupancy of their premises. At the same time, Golub GetHouse, a company responsible for management of the project, is currently conducting talks with a potential buyer for the office building. Once the final offer is made, the Mint of Poland – one of the companies with controlling stake in the project company with respect to key decision making – will be able to decide on the potential sale of the project.

Real Estate Development, conducted via special purpose vehicles and directly by the Mint of Poland, is a very prospective segment of activity. Commitment to the Group’s further business development in this area will have a positive impact on the results later this year.

PreviousMint of Poland pays tribute to Pope John Paul II on the birth centenary
List of current affairs
Mint of Poland reports FY 2019 consolidated performanceNext
Closing of the release or further navigation of the site signifies your consent and no blocking of cookies.